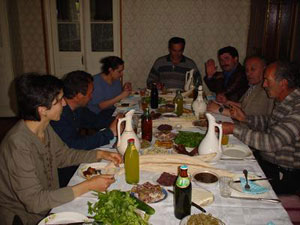 Georgians drink a lot of wine, but not every day; only if there are guests over or something is being celebrated.

The former is the "problem" for the visitor in Georgia, you are always the new guest every where which means that every one has to drink in your honour and a feast will be held wherever you arrive. Often the second day every one has to drink again because the celebration on the first evening was not big enough since often you have arrived unexpectedly. The second evening all the friends of the family gets invited to the feast (keipe). If you then on the third day leave, the chances are big that on the bus you meet a new friendly person that invite you to his/her house and there you go again...

A few tips about alcohol consumption in Georgia:

The Georgian songs and dances is one of the most beautiful parts of the very alive Georgian tradition. Ask your guest family if they can sing Chakrulo for you, the Georgian song that in 1976 was used by NASA for the depart of Voyager as a proof of their singing talent. The best traditional Georgian chores are Rustavi and Erisioni (the " Georgian Legend", more show than Rustavi). In the Rustaveli street in Tbilisi are as well the Rustavi as the Erisioni choir located; also look out for folklore concerts in the opera and the National Ballet. The modern Georgian dance music is also not bad, very relaxing with a jazzy sound, Stepane is of the most popular musicians. In the Rustaveli street you find quite a few music shops.