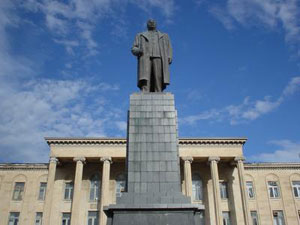 While in the rest of the former USSR all the Stalin statues (as opposed to the Lenin statues that still stand there) were pulled down already in the 50ies (Chroetsjov period) in Georgia there are still quite a few left. The hard Soviet dictator, originally named Joseph Vissarionovich Djugashvili was actually born in Georgia. This explains both the statues and the still burning love that many georgians feel for the Georgian that made it in the big Soviet. Gori is Stalin's birth town and the major destination for a Stalin pilgrimage. The following monuments and statues remind us of the cruel ruler that here saw the daylight for the first time :