- sex tourism : you will notice the “bumsters” on the beaches, young Gambian men in search for a Western woman who will give them a better life. This industry is a lot bigger than you expect, it is amazing when you start noticing after a while how many people live indirectly from it. 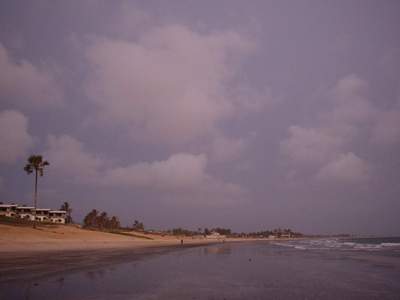 - money : the Dalasi has lost a lot of its value since 2001. In august 2003 you could get 255D for 5000CFA and 33D per euro. The post did not change its tariffs since 2001, although the dalasi is worth 3 times less now, which gives extremely cheap post and parcel service. Gambia is the place to send some stuff home ! There are plenty of street money changers in Banjul, they all try to give you a bit less than the rate you get in most of the few exchange offices (was 33.15D for a euro). Changing in a bank or hotel will give you only 27D for a euro. Credit cards are therefore not very useful as you will lose a lot of money on big amounts. As exchange offices (which have good rates) don’t accept credit cards, I went quickly over and back to Kaolack to get some CFA out of the ATM’s there so we could pay our flight tickets in Banjul without losing too much on the bank exchange rate.

- internet : there are a few internet cafés in Banjul and a lot of small ones in Serekunda and Fajara for 20-30D an hour.

- getting there and away : see on the bottom of this page and on my Senegal Travel Guide for information how we crossed the land borders between Gambia and Senegal. There are several cheap airline companies flying to Banjul : Gambia Experience (to London, http://www.gambia.co.uk, around 350 euro, or contact them in the Senegambia hotel on [email protected]), Sierra National (to London, T 397551), Futura and Gia (to Amsterdam and Munchen, contact Gambia tours in the Kairaba beach, T 472785/57). Olympic Travel ([email protected]) and Alvarenga Travels are good. We bought a flight Dakar – Stockholm with Air Portugal in Alvarenga for 420 euro.

- Beach resorts : if you are coming for the beach you should take a hotel right on the beach. There are lots of big, expensive and impersonal package hotels. Leybato, where we stayed is very much an exception, as it is the only small scale and very cosy guesthouse right on the beach. Bakau has not really a beach, but some nice cliffs to walk along and a tiny fishing port.

- to see, tours : Banjul looks rather like a village than a capital. The city centre is very small, all shops (and a lot of restaurants as well !) close at 6pm and from 8pm on the streets are deserted. 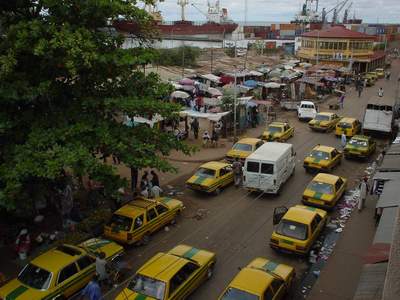 - money exchange : there is a very good exchange office at 78 Hagan street, which offers the best rates in town.

- goods : Banjul seems to be one of the main trade hubs in West Africa, most products we saw on sale in both Guineas came from Banjul, where they cost half price. It is therefore also the cheapest place to buy new bikes and bicycles, but quite an adventure to find them. For more information on the bikes we bought in Gabu see the Guinea Bissau report. Some travellers we met bought second hand bikes in Banjul and sold them after two weeks cycling easily and with profit in Zinguinchor (Senegal).

- hotels, accommodation :
As there are minibuses every 10 minutes between Banjul and Bakau on the coast, there is no reason to stay in Banjul.
* Ferry guesthouse, T 222028, opposite the ferry terminal, the first floor has a very active whorehouse activity, but the atmosphere is still quite safe (in many West African countries hotels increase their number of guest thanks to some prostitutes). There is only running water on the first floor, but the prostitutes don’t like if you use this (their) shower, so you have to get buckets up to the second floor. The ventilator on the roof is to slow to get the heat out. The neighbourhood gets very dark and deserted after 8pm which gives an unsafe feeling, so maybe it is better to get a hotel (with water) more centrally located. 400D/dbl is quite expensive (the great Leybato guesthouse right at the Fajara beach costs 500D/dbl for a lot more luxury). 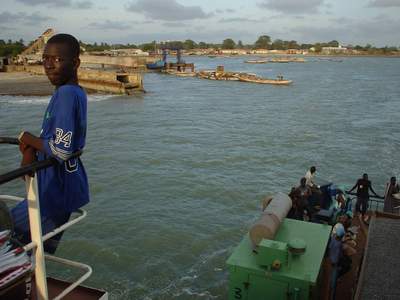 - transport :
* minibus Banjul – Bakau : every 10 minutes, 5D, 30 minutes
* minibus Banjul – Serekunda : every 10 minutes, 5D, 30 minutes
* ferry to Barra and on to Senegal : see the Senegal report for the trip Banjul – Kaolack.
* direct GPTC bus Barra – Dakar : it seemed so perfect : make your reservation on 710140, take the first ferry at 7am to Barra, and get there on a luxury coach which will bring you straight to Dakar. Unfortunately we can not recommend this bus. First you have to run as fast as you can at the arrival of the ferry in Barra to the bus (which is easily visible standing alone within the port walls), then they read the names of the people who have a reservation. We were not on the list ! So we had to wait in row until they gave the signal that the fight for the last 8 seats was open. We had to push and push to get in although we had run fast and were in waiting in 3rd position. Then the bus waits more than an hour, until 9am before it leaves. The border check in Senegal takes a long time, as most passengers have a lot of luggage and Senegalese don’t like Gambians, so they check everything extra. This was also clear in Senegal where we were very frequently stopped for a half an hour luggage check. Finally we arrived at 3pm at the outskirts of Dakar, but then again the bus stopped every minute to let a few passengers of. Only 5 people were going to the busstation Pompiers, the rest delayed the bus a lot by getting off every 100m. We arrived at 5.30pm in Dakar, much later than we would have had if we were by bush taxi.

- Guinea Bissau consulate : along the coastal road
* you need 1 picture (scans and colour copies accepted)
* open Tuesday – Friday : 9am-2pm, Saturday : 9am-1pm
* visa price : 1 month single entry 120D, 2 months double entry 150D and 6 months multiple entry 400D; because these prices have not gone up with the devaluation of the dalasi, these prices are very cheap, but be prepared to pay the difference with the “official” visa price at the border. We saw a paper at the land border at Sao Domingos which said that a one month visa costed 5000CFA (as is charged in the GB embassy in Zinguinchor) and that persons who paid less would have to pay the difference. They did not ask us anything extra though.
* your visa is ready in half an hour
* See my Guinea Bissau Travel Guide for more information on our trip to Guinee Bissau.

- beaches : the Bakau beach is nice to walk along at low tide, but it consists of high rocks, so you don’t stay really on the beach when you stay in Bakau.

The beaches of Fajara, Kotu and Serekunda 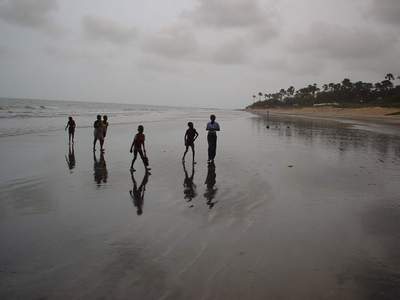 - accommodation and hotels
* Leybato : a great place to stay, right on the beach, cosy terrace and hang mats with view on the sea and sunset, 10 huts (5 doubles at 500D and 5 bigger ones at 600D), breakfast included, huts have hot shower and fridge and are clean. It is the only place of this kind we found along the beach. All the other beach hotels are big, ugly and expensive. If you don’t stay here (I suppose it fills up very quickly in season, so reservation on 497186 or [email protected] is absolutely necessary) it is also a good place to eat or drink in the evening, this is the favourite of a lot of expats. Unfortunately there seemed to be some money stolen in one of the huts (probably) by a cleaning woman so don’t leave any valuables in the room when they are cleaning (every morning).
* Safari Garden Hotel : small hotel, looked nice to us before we met the arrogant old British owner and before we saw Leybato. This hotel has a swimming pool, which has to compensate the location which is about 1km from the sea and therefore not recommended.
* Senegambia Hotel : This is one of the oldest package tours hotels and it looks a bit like an army camp. Unfortunately for them their beach has completely dissapeared because of erosion and it looks terrible now. I suppose you will not find the picture here below in their publicity leaflet ... 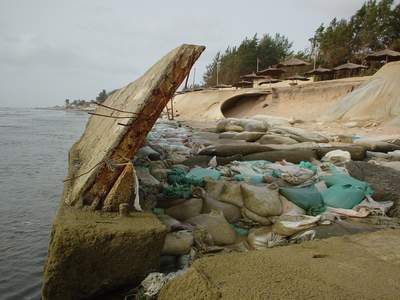 - cotton tree : if you are interested in huge trees : there is a really enormous cotton tree about halfway along the road between Fajara and Serekunda (ask for it, everybody knows where it is), on one of the monstrously big branches of the cotton tree grows a mango tree.

- books : the Timbooktoo bookshop in Fajara has really a very good selection of books from and about Africa, although it is a bit expensive. In Serekunda and Banjul you can find in the local bookshops reprints of the books of the most famous West-African writers for only 40D (in Timbooktoo you pay for the same prints 150D). These reprints are on thin paper and take thus almost no space or weight in your backpack, perfect to get a bit deeper in the culture of the region !

- exchange : there is an exchange office behind Kotu market where you will have to bargain a little bit to get the same rate as in Banjul, but they will most probably offer the best price if you don’t want to go too far from the beach. There are no money changers on the beach, bumsters are not involved in that business.

- accommodation and hotels :
* Basse Guesthouse in the centre, basic with dirty sheets and a lot of prostitutes hanging around in the evening, only electricity until midnight, there is a fan but it will become very hot as soon as the power stops. There is running water in the shower, but I found it too dirty to wash myself there. The next door Plaza open air disco can be very loud until 4am, we could not sleep and decided at 1am to go over there and saw a very good live concert of a Guinean band.
* Plaza Hotel : is maybe better than the Basse Guesthouse, it is on the same square.
* transport : Basse to Banjul could take minimum 10 hours, but it will mostly be rather 12-15 hours. The road is in bad condition, so be prepared for a bumpy drive. We did not find any bush taxi’s in Basse so took one of the minibuses (better to leave early because it is far and after 11am the buses don’t fill up anymore). Our two first minibuses broke down somewhere along the road so it was 10pm when we arrived in Soma, halfway to Banjul.

- accommodation and hotels :
Moses Guesthouse, 125D per room, shower in the room and 24/24 electricity, can be a bit noisy.

Travel from Gambia to Senegal (Casamance)

- public transport Serekunda – Giboro border : 35D + 5D luggage, 1h, ask in Serekunda for the “garage Casamance”, there are several sept places a day to the border with Casamance.

- public transport border Gambia – Senegal : a very easy border, stamp, no luggage check, you get 5000CFA for 25D from moneychangers or can buy with the rest of your dalasi’s some mango’s.

See the Gambia photography gallery for photos, pictures and images.